US Defense Secretary Mark Esper speaking during a press briefing in the Pentagon in Arlington, Virginia, US [Yuri Gripas/Reuters] [Daylife]

US President Donald Trump late last month cancelled the Obama-era prohibition on the use of anti-personnel landmines.

Trump ditched the policy because the Department of Defense found that the restrictions on landmine use placed US forces “at a severe disadvantage during the conflict”.

In September 2014, President Barack Obama announced the new policy banning the use of landmines except in the Korean Peninsula due to its “unique circumstances”.

He pledged that the US was going to find ways to “ultimately comply fully with and accede to the Ottawa Convention” as the US government prefers to call the 1997 Mine Ban Treaty.

Many experts agree that the new US policy of using landmines violates international humanitarian law and sets back the great progress that has been made towards a landmine-free world.

Organisations including the Red Cross have issued statements condemning the move.

Although the Mine Ban Treaty has not been signed by the US, China or Russia, significant progress has been made towards its goals.

The Department of Defense’s memorandum setting out the new landmine policy was issued on January 31 and signed by US Secretary of Defense Mark Esper.

It states that the US military is required to “regain its competitive advantages by becoming more lethal, resilient and agile. Area denial systems such as landmines play an important part in enabling these force attributes”.

However, experts agree that even “non-persistent” landmines have often killed civilians and that their use violates international law.

The exact circumstances under which the US can use landmines are still vague. The memorandum statesthat the military’s ability to use landmines “will not have any expressed geographical limitations”.

The Mine Ban Treaty has been signed by 164 states. The treaty comprehensively bans the use, production, stockpiling and transfer of anti-personnel mines. It aims to create a landmine-free world.

The treaty further aims to end existing suffering and prevent future suffering as a result of landmines. It contains strong provisions on compliance mechanisms.

States signing the convention accept that they will destroy anti-personnel mines and assist the victims of the explosives. 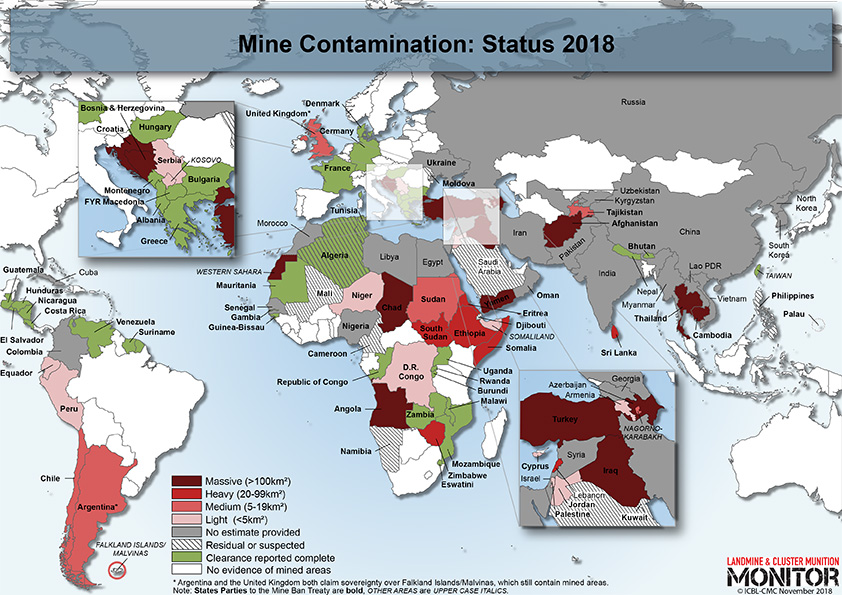 In the more than 20 years since the signing of the treaty, most signatory states have destroyed their anti-personnel landmines, according to Human Rights Watch.

According to Marianne Schultze, human rights expert at the Landmine and Cluster Munition Monitor, “the world was getting close to universalisation” on the effort to fight landmines. She called the US announcement to reverse Obama’s prohibition a “hard hit”.

Ken Rutherford, co-founder of the Landmine Survivors Network who lost his legs as a result of a landmine accident, said the main reason that mines violate international humanitarian law is that it is a weapon that does not discriminate between civilians and non-civilians.

Because of the provisions protecting victims, Schultze described the treaty as the “one humanitarian treaty that bridges into human rights issues”.

Donor countries and states affected by landmines have contributed approximately $699.5m in support of action against mines in 2018, the International Campaign to Ban Landmines (ICBL) has reported.

According to Schultze, the significance of the US policy reversal is “huge”. She said: “In spite of the fact that the US has still not joined the treaty, it is a great supporter of anti-landmine efforts, especially in terms of destroying stockpiles.”

Rutherford added that the US has by far made the greatest financial contribution to anti-landmine efforts.

“The US has spent more than the next 10 biggest contributors combined,” he said, adding that the US has done more to ban landmines than many countries that have indeed signed the Mine Ban Treaty.

Schultze said the policy reversal on landmines by the US was “a retreat to Cold War tactics”.

While Schultze and Rutherford agree that the US is unlikely to implement its new landmine policy, the fact it has approved the use of landmines is significant.

Schultze points out: “The vast majority of landmine victims are children playing outside and people gathering firewood”.

Schultze said that, regardless of whether the US implements the new landmine policy, the recent US rhetoric on landmines is pertinent.

According to Wareham the fact that landmines are designed to maim and that the US is “violating an international norm”, makes the use of landmines immoral.

When asked by journalists whether it is “immoral” to use landmines, Esper said at a press conference: “In everything we do, we also want to make sure that these instruments – in this case, landmines – also take into account both the safety of employment and the safety of civilians and others after a conflict.”

People who shout in church are selfish – Vector

A story of exile and return: From Italy to Syria and back again

5 of the Best Moments of Bobby Moore’s Career

UN: 14 children among at least 22 dead in Cameroon massacre